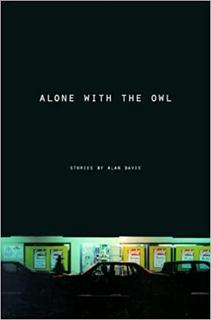 Click on the link below to purchase the book

Alone with the Owl is the second prize-winning collection of short fiction from the co-editor of Visiting Bob: Poems Inspired by the Life and Work of Bob Dylan (2018) and the founding co-editor of American Fiction: The Best Unpublished Short Stories by Emerging Writers (1988-present).

"I kept thinking that I wouldn't mind ending up as a character in one of his stories. Odds are, he'd do me justice." -Dorothy Allison, New York Times Book Review

"Although these stories occur in many different parts of the country, they are aesthetically shaped by the landscape of Louisiana, the muddy delta, and the oily bayou - the bottomland to which all things flow."

-Debra Marquart, The Horizontal World, The Night We Landed on the Moon

These 14 stories, one performed as a rock opera, another part of The Wrecking Ball, the acclaimed multimedia event, were first published in literary periodicals like The Quarterly, Image, ACM, Ascent, The Chattahoochee Quarterly, The Cream City Review, The Great River Review, North Dakota Quarterly, San Jose Studies, and South Dakota Quarterly. Davis received a Loft-McKnight Award of Distinction in Creative Prose and a Minnesota State Arts Board Fellowship.

"Now he lets go of that, of nothing, and for the first time, without a passport, he enters a country that is strange, a country he no longer knows, and finally finds his voice and reaches out to take the hand that is offered, a hand that feels very familiar in a darkness with no beginning and no end, and he begins to speak, no longer thinking of himself as a traveler but as someone who will arrive momentarily."

Table of Contents:
Traveling by Moonlight; The Solid Earth; The Giving; Suddenly I Meet Your Face; Catch and Release; Movement of Natural Light; Black Ash Pinwheel; Spending the Day with Donald Trump; Women of the Brown Robes; The Battle of New Orleans; Beauty of Tropical Places; The Vanishing; Alone with the Owl; Rough God Goes Riding.

"I moved to St. Cloud to get an education and stayed, working as a housepainter, until duty called. My great-grandfather had served in the Great War, my grandfather had served in the Good War, and my father had gone to another one. It was my turn. They sent me straight to a theater of operation, a place where my ancestors once lived. It had a name nobody in my company, even the lieutenant, knew how to pronounce."

"He has an original talent, a feel for action, a sparse yet vivid style, a sharp satirical sense, a keen eye and ear for the follies of the age."