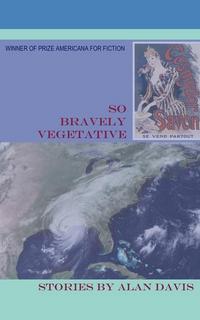 So Bravely Vegetative is the third prize-winning collection of short fiction from the co-editor of Visiting Bob: Poems Inspired by the Life and Work of Bob Dylan (2018) and the co-editor of ten editions of American Fiction: The Best Unpublished Short Stories by Emerging Writers (1988-1999) - "This, truly, is a breath of fresh air for us all, writers and readers alike." -Raymond Carver, author of Where I'm Calling From

"Alan Davis writes with a poet's sense of language, lyricism, and imagination. The range in these stories is nothing short of amazing."

"A marvelous collection of stories - beautifully written, daringly inventive, frequently disturbing. These stories will haunt you."

"There is magic in a world that still somehow seems devoid of magic,"      -Publishers Weekly.

These 25 stories, some of them flash fictions, first appeared in a variety of magazines including The Sun, Facing the Change: Personal Encounters with Global Warming, Consequence: A Literary Magazine Addressing War in the 21st Century, Apocalypse, Mental Shoes, and Review Americana.

"Listen," Frank with his monkey brain told the Fireman, "wait and you will walk out soon, get taken first class to New Orleans and your good time and that job on the docks. And you can wait as long as it takes. Wasn't you solitary six years? You have your rock when you asleep. When you wake, you have me, Frank." What the Fireman can't or won't tell Frank, Frank knows anyway, somewhere in the monkey coils of his rubber brain, like tubes on the inside of a machine making ice. You don't tell the machine to make ice, it just does. You don't tell Frank everything, he just knows."

Table of Contents
Prologue: The People of Bone

Playlist One: Catching Out

My Father Tore Out of the House; The Fireman; Mostly Musk; Catching Out; Oxygen; Marko Kissed Her, But She Didn't Respond; French-Milled Soap; Ding Dong Ditch.

Intermission: You Can Call Me Al

He Thought I Could Play the Trumpet; Dreamer, Live in the Here and Now; I Walked Dizzy Through the Drizzle; Piñata; Zen Roses; Getting Along with Donald; Home Shopping.

Intermission: Bringing It All Back Home

Secret Cave; When Will the Crane Carry Me Across the Sea?; I Dreamed That I Saw You; Lost and Found Ministry; Hallelujah, I Whispered; The Time Falling Bodies Take to Light.

Epilogue: The Things We Say When We Say Goodbye.

"I grew up in New Iberia, Louisiana, a sleepy town best known for the meandering Bayou Teche, the Shadows-on-the-Teche plantation house, and boudin, a Cajun delicacy (if that's the right word) of rice, pork, peppers, and spices stuffed into a pig-intestine casing, People ate it in oyster-shell parking lots while they leaned against the hoods of their cowboy Cadillacs, an American-made four door pickup truck with lots of chrome."

-My Father Tore Out of the House

"It's hard to convey my enthusiasm for this book. All the ordinary adjectives of praise seem trite and inadequate."     -Tim O'Brien, author of The Things They Carried

"She willed herself to believe that there would be times when one would think of the other the way someone lost and traveling alone might come upon a patch of skywriting on a clear blue day. If that happens, you read it without knowing what it is that you've read until afterwards, when the message rustles in your mind and gives you the one clue required to continue the journey."  -Marko Kissed Her, But She Didn't Respond

-Will Weaver, author of A Gravestone Made of Wheat

"We walked out together. The storm had passed over. Steam was rising from the streets. We shook hands. "By the way," Paul said, "you know my name. What's yours?"

"Our people live with ghosts. My husband and I left the homeland because we could, but also because he thought he was Rama, the enlightened one, and wanted me to be Sita, whom he would save, but there is no salvation in America, no Hanuman with his monkey tribe to rescue me from the evil ten-headed Ravana. The ghost of Grandfather followed us here to Minneapolis, even though on Java we carried his once-body in the dragon tower through the streets, even though the village gamelan played clanging music the entire time the way it was supposed to, even though we drank rice wine and wore the strip of white cloth around our waists. In a corner of our compound, a priest recited almost unnoticed while another man translated into Bahasa. None of us know the old dialect."